Guns and Ammo just posted an interesting comparison of 1911 accuracy. Below is the first page and here is a link to the 7 page article in it’s entirety. Enjoy 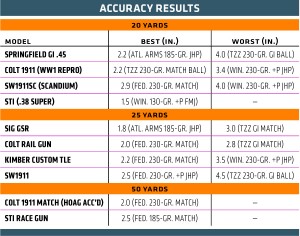 Accuracy in a pistol can’t be judged easily; the uses to which it could be put create too many competing mandates that would be difficult to fulfill. This is particularly true of the 1911.What’s required for a Camp Perry-class .45 is unnecessary for a pistol used for duty, self-defense or a local combat match—where total reliability trumps knothole groups.

About the only sure thing one can say is that the 1911s of today are more accurate than those produced in the past. Stronger steels, tighter tolerances and better barrels have made purpose-driven target guns and the average shooter-grade 1911 superior to what our fathers and grandfathers shot. And that’s a good thing. Both the champion and the beginner will do better with a more accurate pistol. There’s really no downside to this; while newer guns are made to closer tolerances than their predecessors, average reliability hasn’t suffered appreciably due to the precision allowed by CNC machinery.

Exceptional accuracy—then and now—would be a machine-rested, 10-shot 2- or 2.5-inch group at 50 yards with either match target loads or carefully brewed reloads. Usually only accurized pistols will be capable of this. Excellent out-of-the box accuracy from a quality 1911 at 25 yards will run about two inches (sometimes under). Good 25-yard groups will run three inches and not much more.

Just changing ammo can have a dramatic effect. For instance, many .45s don’t like GI-issue ball. I’ve switched to commercial loads (Federal, Winchester or Remington) and watched groups shrink by half. It all depends on the pistol.

Today’s 1911s
I wanted to see what today’s guns could do. I was particularly interested in comparing Springfield’s bare-bones “GI .45” 1911A1 to my original WWII Colt. I was also curious about what types of groups a current duty-type pistol was capable of. I obtained guns from Colt, Springfield, S&W, STI and Kimber to augment others from my safe. I only wanted to use a small sampling of some of the mid-priced, stock pistols with the ammo I had on hand. No need to reinvent the wheel here; a full-on accuracy test of all the guns available with plenty of ammo would go way beyond what I was looking for.

I didn’t test all the ammo brands I had in every pistol, either. I used what I felt was appropriate to the pistol or what might prove interesting accuracy-wise. All firing was done at 20 and 25 yards, except for the McMillan-built STI and Hoag-accurized service pistol, which were shot at 50 yards (the STI was shot two-handed from a rest; the Colt had been machine-rested numerous times in the past). The majority of the shooting was done from a two-handed rest, but we also did some standing one- and two-handed firing.

A total of just under 500 rounds of .45 GI standard and match ball, commercial +P and standard 230-grain, 185-grain jacketed and HP match (as well as .38 Super +P 130-grain FMJ) was expended over three range sessions. Only two malfunctions occurred: one from my 1943 Colt 1911A1 and the other from the Springfield Armory GI. The old GI Colt continued to have issues with the SWC and JHP rounds, which was expected, but after the Springfield was lubricated properly, it didn’t have any more malfunctions.

I was pleasantly surprised at the performance of the Springfield. It reliably fed every type of bullet with no malfunctions, after being lubricated properly. Out of the box it had a clean-breaking 5.2-pound trigger and grouped to point of aim at 20 yards. It easily outshot the original Colt GI 1911A1, which has a pristine issue barrel. The Springfield GI gets my vote for the best value.

I’ve had a love-hate relationship with the 1911. I learned to shoot it very well only after years of training. The issue ones I played with in the Army during the 1970s rattled and couldn’t be counted on to hit a man-sized target much beyond 15-20 yards. The commercial guns I shot then weren’t much better.

Today’s average, store-bought guns represent a quantum leap in precision compared to what was available 30 years ago. With proper ammunition, the Kimbers, Colts, SIGs, Springfields and S&Ws will all shoot excellent groups at 20 and 25 yards with no tendency to throw a wild shot or two out of the group (something I found was common with older, non-accurized guns).

The newer fixed-sight guns also shoot to point of aim, which usually wasn’t true back in the day. What I also found surprising was that there was no clear-cut champion here; all these pistols performed well out of the box. The level of intrinsic accuracy was about the same—depending on ammo—across the board. I expected the custom McMillan STI race gun and the Hoag-accurized Colt service pistol to shoot superbly and they did. But the Kimber, SIG, Springfield and S&Ws also grouped tightly at the distances where they’d be used. You can argue whether one is “better” than another; but the 1911s built today are capable of out-of-the-box accuracy that wouldn’t have been possible a generation ago.

Below are my shooting results from the various 1911s listed in the chart above.