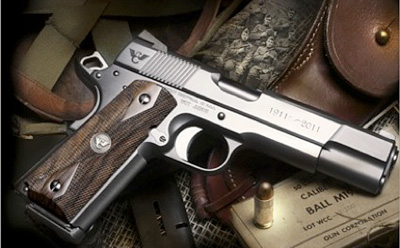 Browning was the greatest firearms designer the world has ever known and the 1911 handgun is arguably his best effort. Designed in a time when electricity was still new and automobiles were a rare sight- the 1911 is a true engineering masterpiece that has not only withstood the test of time, but also evolved into what many consider the ultimate fighting pistol.

When considering a special gun to pay tribute to this important anniversary and this extraordinary man, we wondered what would John Moses Browning create today if he had Wilson Combat engineering and manufacturing quality at his disposal and the benefit of seeing how his creation had evolved in the last century?

Using the same materials Browning would have used in his era like forged and billet machined carbon steels, presentation walnut for grips and painstakingly hand-finished bone charcoal blue from Doug Turnbull, Wilson Combat has built a modern version of what Browning might have originally envisioned with his 1911-The New Wilson Combat Contemporary Classic.

Limited to 100 serial numbered pieces in 2011, the Wilson Combat Contemporary Classic 1911 is hand crafted with turn-of-the-century materials and finish-with many Wilson enhanced performance options to suit the modern shooter. Custom features abound-and they all have a practical purpose-fine checkering fore and aft for enhanced grip, better sights with a gold bead insert front blade, and better ergonomic controls like a beavertail grip safety that will make this an easier pistol to shoot well than an original-especially for more than a handful of rounds. A fine presentation case is included to protect and display your investment.

Browning’s original features still remain like an integral lanyard loop attachment for field use and flat mainspring housing and long, steel trigger that will still fit most hands perfectly a century later. We added our carry cuts to the front of the slide in deference to Browning’s second greatest handgun design, the GP-35 or “Hi-Power”, a feature that gives a the slide distinctive silhouette and enables easy holstering. You will also note the “JMB” initials and unique serial number, our lasting tribute to the “Maestro” on every gun. Wilsoncombat.com.