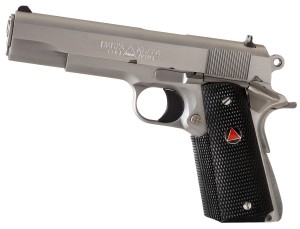 Stop the presses! I have been seeking a pistol chambered in 10mm auto for quite some time. Up until this point the GLOCK 20 was the front-runner on my wish list. Then as luck would have it I was catching up on some shooting magazines that had stacked up over the summer. In one of those magazines I stumbled across a review of the recently re-released COLT DELTA ELITE 10mm.

Apparently in about 2009 Colt took the discontinued DELTA ELITE back to the drawing board and redesigned some of the guns original design shortcomings.

Why 10mm? The 10mm is one of the flattest shooting calibers ever offered, it’s ballistics nearly match that of the venerable 41 magnum. Translated this equals accuracy and stopping power.

I plan on ordering one of these soon. Hopefully have it by Christmas or so. I think it would be a prime candidate for some upgrades as part of a project for this site. At this point I see the following work would be performed: