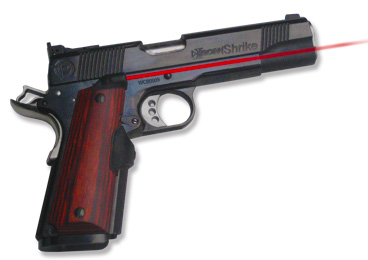 Until now, the 1911 owner who wanted both custom grips and a laser for their 1911 was out of luck. Crimson Trace, the industry leader in the laser sight arena has solved this problem by integrating their patented, grip activated laser with a range of high-end stock materials, such as G10 and stabilized laminated wood, bringing both artistry and rugged engineering to John Browning’s classic design.

The Crimson Trace 1911 Master Series Lasergrips starts with two solid stock blanks which are then CNC machined to tolerances of 0.002″ to form the grip profile and texture. Skilled technicians carefully set the laser sighting module and instinctive activation switch package into the grips by hand and the entire package can then be easily installed by the end user. Simply remove the original grip screws, pull off the old grips and snap on the Master Series replacements.

Through the use of an ultra-compact diode module and inspired design, the Master Series is compatible with any ambidextrous safety on the market and features a new master on/off switch. This combination means that popular bobtail versions of the government and commander size pistols now also have Lasergrip option, allowing this easily-carried defensive handgun to benefit fully from the advantages of laser sights.

The shooting industry got a sneak peek at the Master Series grips at SHOT show in January and feedback from dealers, trainers and professional shooters was incorporated in to the final design. These newest grips will be available in early May, with an expected MSRP of $360. Crimsontrace.com.